My Experience in the Climatepedia Program

When I first began the Climatepedia program, I was nervous. A class that doesn’t count for NC State credit on top of all my other schoolwork? After the first meeting though, my concerns vanished.

I participated in a 12-week climate change program, taught by graduate or just-graduated students. It was a completely virtual program, and my cohort was made up of about seven students. The first meeting was fun–I learned the general process of the program, met everyone, and we went over the basic framework of what climate change is. I was one of the only people from the South, and this was especially interesting when the students up North were dealing with feet of snow and freezing temperatures. The most impactful part of the meeting was how connected everyone felt–we were all there not because we had to be, but because we wanted to learn about climate change and each other. I left the meeting feeling really happy and inspired.

The program went like this: we would have readings and videos to go through every week before class. Each week was a different topic, ranging from climate change models to international and national climate policy to climate justice. We would read through the information and occasionally have a project to do, like interview someone you know who is climate-aware. The most fun activity was creating a climate meme every week. We had to create a meme based on the information that we learned from that week. Here’s an example of one of mine:

My favorite activity that I did in Climatepedia was interviewing someone from my cohort. This was within the first few weeks of the program, so everyone was still getting to know each other. I interviewed Nour, a bright, bubbly young woman from New York City. I was surprised to learn that both of her parents were ambassadors for Egypt and France at the United Nations! Nour was passionate about child education and was doing Climatepedia to better explain climate change to young students. I was elated to speak with her and realized that, even though we had really different lives, we both cared about the planet and its people. That was the main takeaway from the program: there are inspiring people everywhere. If we can share ideas and be innovative together, our options are almost limitless. 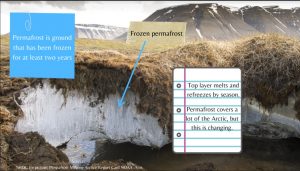 A slide from a presentation I created about permafrost.

This is a page of my “zine” a short magazine I made about fast fashion.

So, why did I do Climatepedia during a crazy school year? To feel inspired and hopeful about our future.