The Feathered Hermits of the Woods

This summer I was given the chance to return to the Black Mountains to continue working on the Black Mountain Ornithological Study, specifically on Hermit Thrush. During the summer, the one moment that stood out the most in my mind was re-capturing one specific bird. 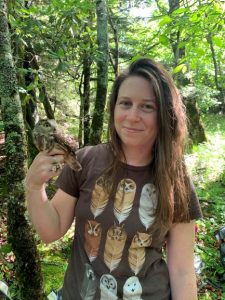 It is 5:15am and we hop in our cars and start the 40-minute drive up the mountains to Bald Knob Ridge Trail. This is our fourth morning on the trail and our goal is to try and catch three Hermit Thrushes we placed GPS tags on the previous year.

We decided we would try for a bird named SMWW, nicknamed double white, one of the three birds with GPS trackers. We walked a mile and a half down the trail toward double white’s territory. It was cool with a light fog as we walked quickly down the trail. Blackburnian and Canada warblers sang a small symphony above us and the occasional deep croak of a distant raven called somewhere in the valley. As we neared double white’s territory, we heard the familiar ethereal call of a Hermit Thrush. (I recommend looking it up, it is a very beautiful call.)

Arriving at SMWW’s territory we set up two mist nets hoping to double our chances of catching a bird. After setting up the nets, a Hermit Thrush decoy and speaker, we all hid. I started the recording of a Hermit Thrush call and waited. Let me set the scene. There are four college aged girls crouched, down behind trees deep in the woods, with binoculars clutched in their hands. We look like the world’s worst hide and seek players. Ten minutes go by, and there is nothing. No response call, no fly by, nothing. We honestly were feeling a bit crestfallen. I paused the call, sometimes when you stop the call it can peak the bird’s interest and bring them in. Ten more minutes pass, and we restart the call. 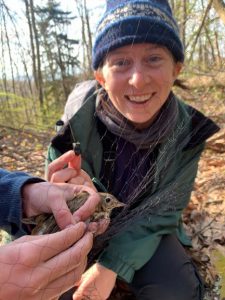 Instantly we hear a response in the distance. All of us perked up and prepped the binoculars. Suddenly, Vanessa whispered, “guys, I see double white, and I can see the GPS tag!!”. Honestly, I nearly screamed. We waited and SMWW continued to come in closer, 20 agonizing seconds later double white flew towards the decoy and hit the net. We all sprinted towards the net and I held the net closed so it could not escape. We all yelled in glee! The chances of us recovering one of the GPS’s was so slim that we did not think we would get any of them back. We removed double white from the net and removed the GPS unit. After we took some measurements, we released him back into the forest.

When we got back to our basecamp that afternoon, we downloaded and processed the GPS data. I was very excited to learn where these birds go during the winter. We hypothesized that this Appalachian population either moved east to the Piedmont or moved somewhere south during the winter. When the data finished processing, we learned that double white overwintered in a town called Luverne, Alabama and we could see each month where the bird had been! This summer was so special to experience the rush of recapturing this bird and recovering a year’s worth of data all in one day! If anything, this solidified my desire to do fieldwork in my future career.