I traveled to Ecuador with 16 others to study tropical ecosystems and wildlife during spring break. Ecuador is a country in northwestern South America that has distinct geographic features and incredibly high biodiversity. Our trip starts by visiting the capital of Ecuador – Quito. The name of Quito means “half earth”. It is the second highest official capital city that has an elevation of 9350 feet. It’s surrounded by mountain peaks and most of the houses are built on hills. We visited major catholic churches, equator museums, as well as the old town of Quito. We learned a lot of history about this city and people’s lives in Ecuador. The next day we headed to Andean highland that has a unique landscape called paramo. The rest of our trip was mainly exploring the Southeastern and Northern parts of the Amazon basin. 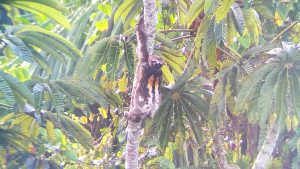 This trip was highlighted by our encounters with amazing natural scenery and incredible wildlife. Based on statistics, we saw 228 species of birds, 26 mammals, 13 amphibians, 14 reptiles, 15 butterflies, and more. At the Antisana Ecological Reserve in Andean highland, we were in a 13,000 feet paramo, under the snow-capped Antisana volcano. We witnessed Andean Condor roaring in the sky, a Spectacled Bear family feeding on drupes, and many interesting birds that are exclusive in this area. After visiting the high Andes, we move on to the southeastern Amazon and stayed in Yacuma Ecolodge. We explored secondary rainforests along the Napo River and an oxbow lake. We saw many birds such as woodpeckers, potoo, kingfishers, flycatchers, tanagers, and prehistoric Hoatzins. We caught some gorgeous and poisonous frogs at night such as a tiger-striped monkey frog, milky treefrog, rocket treefrog, and Wikiri Poison frog. It feels incredible when I held a big and hairy Tarantula on my hand. We spent our last few days in a pristine forest in the North of the Amazon basin. We walked on a suspension bridge over the top of the rainforest canopy and clearly saw wildlife live on the canopy such as squirrel monkeys, red howler monkeys, and male three-toed sloth. We saw a spectacular scene of hundreds of parrots lick clay on a cliff. 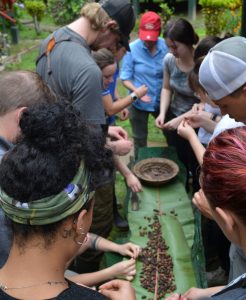 I enjoyed a lot being immersed in Ecuadorian culture and tasting different kinds of traditional food. We visited the local Quechua indigenous village to learn about their customs. The people who live in the village utilize everything from nature. For example, They use dried squash as food containers and spiky roots as cooking tools. “Chontacuro” is beetle larvae that live inside of the palm bole. Local people consume the worm raw, fried, or toasted. There is a special fermented beverage called Chicha, which is usually made of corn, yucca, or fruits. Ecuadorian people have their own natural energy drink – Guayusa tea. It is made from leaves of a holly tree that is native to the Amazon rainforest. Some of my favorite food that we had in Ecuador are Locro soup, yuca bread, churrasco, and empanada. We also learned how to make chocolate from cacao beans and made chocolate for ourselves.

Overall, our wild adventure in Ecuador was one of the best experiences in my life. I appreciate the majestic beauty of the tropical rainforest and marvelous creatures we encountered. I am glad to have these valuable experiences in Ecuador, which reminds me of the original connection that people have with nature.