Homestay Hospitality in a Nepali Village

Over winter break I went to Nepal partly to install a solar microgrid for a Nepali village. I did this through a program called The Green Program and I was incredibly excited to do this so I could gain some hands-on experience in installing solar arrays, to live a typical Nepali villagers’ life for a few days, and to create a long-term positive impact in another country. 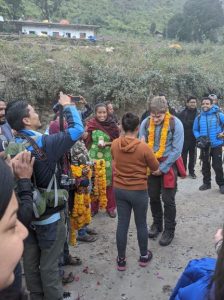 To get to Kalleridovan, the village where we stayed, the other GREENies and I had to drive through the Sindhuli District of Nepal. While the roads weren’t the straightest, we had a world-class view of the Dudh Kosi River. There were rapids that we later rafted on, sheer green mountains, and a long narrow view of the sky the whole time we wound through the country. After about 5 hours and a stop for lunch, we arrived at the village where we were greeted by gracious and hospitable people. An elderly woman marked everyone’s forehead with tika as a sign that we were to be honored since Nepali culture regards guests as gods. This was extremely flattering and oddly humbling. 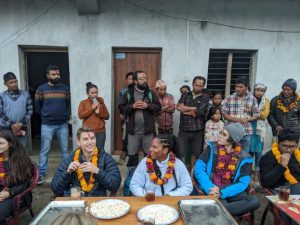 We were then served dal bhat, a traditional regional dish with white rice, curry, and vegetables, by the villagers for dinner. For me, this was when I realized how important the microgrid was to these people and how much I, and many others I know, take for granted. After this touching human experience, we laid out plans for the next day with headlamps and the one light bulb available and then went to our respective sleeping areas. The room I shared with two others had the equivalent of three cots, some blankets, a dirt floor, and a tarp roof. 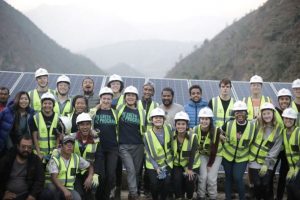 On the installation day, we woke up, enjoyed a light breakfast, and got to work. We laid pipe, installed a frame for the solar panels, and connected the solar panels to each other, along with a grid to provide power for a much-needed irrigation system that now provides food security for the village. This was a critical need for the village since the previous year saw a shortage of water for crops, and many people lost much-needed revenue and had smaller meals since most of the corn died and other crops had a smaller yield. During the entire installation process, many of the villagers were down on the beach with us and offered as much help as allowed and motivated us with their smiles and positive energy. After the process was complete, another meal was served and a party ensued with lots of singing and dancing including a traditional Nepali “rap battle.” Traditionally, if a man challenged a woman to a “rap battle” and she lost, they would then have to marry, but this is no longer common practice. For me, the party was the highlight of the whole trip because of how real and familiar it felt. I saw many generations of neighbors and family dancing together and talking around a fire like I am used to at home. I felt truly welcomed and blessed to share these experiences with people so hospitable and gracious and would urge anyone else to do the same wherever possible.