When I first arrived in Namibia for my study abroad trip, I never imagined seeing a southern white rhino, let alone touching one.

I spent ten weeks at the Naankuse Wildlife Sanctuary, just outside of the country’s capital, Windhoek, with fourteen other NC State students and three TAs. We were there to study the applications of unmanned aerial vehicles (drones) to the field of wildlife biology in a semi-arid savanna environment. 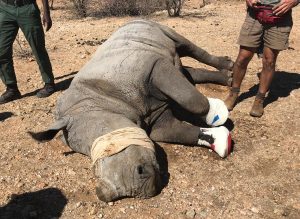 One of my favorite parts of my time in Namibia was participating in a weeklong veterinary clinic at Naankuse Wildlife Sanctuary. My typical days of drone repair were happily interrupted by the opportunity to work with Naankuse’s veterinarian, along with three of my fellow NC State students, and a handful of European volunteers. After breakfast that I enjoyed with the entire NCSU group, I walked through the savanna scrub with my three friends to Naankuse’s vet clinic ten minutes from where we stayed. On the first day, we were in for a treat. Kobus, Naankuse’s veterinarian, arrived in a rush at 8:00 a.m. and said that we all had to load up in a Naankuse vehicle because we would be traveling to a neighboring farm to treat an animal there. Once we were in the vehicle and bumping along the dusty road, a stoic Kobus told us that we would be working with a southern white rhinoceros this morning! All of us were floored and began making exaggerated faces of excitement at each other, failing to stay totally calm and collected.

A while later, we arrived at the neighboring farm and were joined by that farm’s anti-poaching unit (APU). Poaching is a huge problem in southern Africa because of the lucrativeness of animal parts, especially ivory and rhino horn. The real problem of poaching is not small subsistence poachers who steal into wildlife farms to get meat for their family–it is poaching syndicates that maintain a highly organized and complex system of poaching to feed the high demand for rhino horn and ivory in Asian markets (mostly for false medicinal purposes). These large-scale poaching units are often outfitted with military-grade technology and can wreak havoc on privately-owned farms and national parks containing rhinos and elephants. For that reason, anti-poaching units are a necessity for any farm or park in southern Africa. 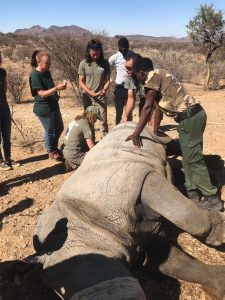 The anti-poaching unit and game rangers led us into the property near where the young male rhino was lying on the ground with bloodied feet. We stopped the vehicle and Kobus went with the APU to see the rhino, which we could not see from our vantage point in the van. When Kobus returned after looking at the animal, he explained that an adult female rhino on the property had been chasing this young male around incessantly, resulting in his feet cracking and bleeding with sores. Kobus prepared a tranquilizer dart and left us waiting by the car as he went to where the rhino was laying and shot it with the tranquilizer gun. Pop! We heard a sound off in the direction Kobus had disappeared, and next thing we knew we all heard tharrump, tharrump, tharrump and saw the southern white rhinoceros galloping with shocking speed through the bush. Unlike in movies, when you shoot a large animal with a tranq gun, it does not automatically collapse into a deep sleep. The tranquilizer dart stings when its needle enters the body, so most animals run with alarm, believing they have been stung by a bee or wasp. Within ten minutes, though, an animal shot by a tranquilizer gun should be in a deep slumber.

When we arrived to where Kobus had followed the rhino, I felt like I was in a dream. Was I really seeing a white rhino stumbling sleepily in front of me? In a daze, I approached Kobus and handed him the rope that he had requested from me, and I watched as he and a few APU guards lassoed one of the rhino’s feet and gently tripped the huge animal so that it laid on its side as it passed out. Then, we all went to work.

Kobus assigned two of us to monitor the rhino’s breathing by placing their hands near the animal’s nose and counting its wet breaths every minute. The rest of us prepared painkillers and injected the rhino’s hindquarters so that he would not feel as much pain. Afterward, I helped unroll gauze that Kobus used to wrap the rhino’s feet in, leaving the rhino with red-and-blue booties. Once we had worked through our tasks quickly, Kobus injected the rhino with a drug to reverse the tranquilizers effects and we left him alone to wake up within the next 10-15 minutes. What an incredible first day at the vet clinic!