The Time I Studied on the Largest Sand Island in the World!

This past spring semester, I was able to study abroad at the University of the Sunshine Coast, Australia. In my classes, I was able to study Field Ecology by visiting two of the islands of Southeast Queensland, Fraser and Stradbroke. As an Environmental Science and Plant Biology major, I was very excited to delve into environments much different than the ones I was familiar with. 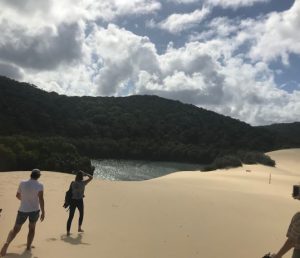 Fraser Island is a world heritage site and the largest sand island in the world which has had more than 700,000 years of tidal action resulting in dune building. Although the substrate of the island is almost entirely sand, a unique phenomenon of mycorrhizae throughout the sand provides nutrients for the plants, allowing a diverse array of ecosystems. This includes towering rainforests, the only existing on sand in the world. Because of the unique habitat of the island, some endemic species of animals were present as well as many other interesting fauna. Within ten minutes of arriving on the island, we saw our first dingo inspecting our vehicles! 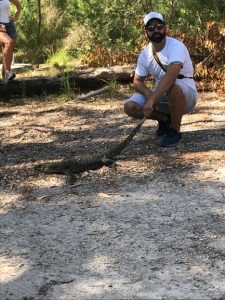 I visited this island with my coastal and marine ecology class in order to see real life examples of what we had been studying in our lectures. This was augmented by the conducting of an observational study on how the number and type of shore birds present are affected by the presence of people. 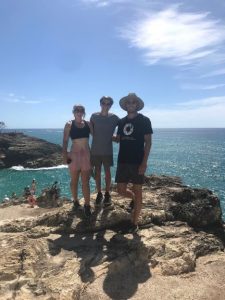 I visited Stradbroke Island, affectionately called “Straddy,” with my Animal Ecology class. A weekend field trip was spent exploring the different habitats present on the island. During one low tide there, I was able to explore a sea grass meadow with the class, where I held soldier crabs and sea cucumbers. I saw a moray eel and the infamous blue ringed octopus!

Even on land, there were so many animals present that were different from the ones in North Carolina. Kangaroos and lace monitors were residents on the island, and I was able to see a wild koala in eucalyptus trees right next to the bay, one of two wild koalas I saw during my semester abroad. Throughout the field trip we were learning and practicing field data collection methods, and I was even able to practice safely removing and observing a swamp rat from an Elliot trap. We used camera traps in both land and aquatic ecosystems in order to observe the fauna in these habitats and were able to see a large diversity. We captured a moment when an eagle and a lace monitor were fighting over a fish used as bait! 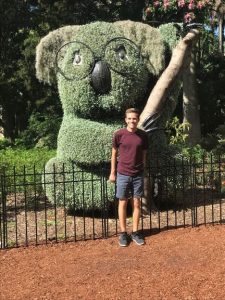 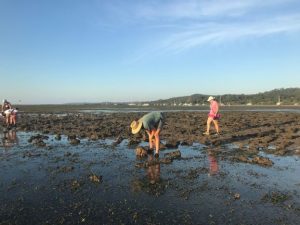 The Ecology classes that I took in Australia really valued firsthand experience and exposure. Excited to learn that I would be going on these field trips, I felt the classes had been a good choice, as much of the reason I wanted to study in Australia was to see how their flora, fauna, and environment differ from ours here at home in North Carolina. From a cultural perspective, I was really able to spend time with Australians as they made up the majority of people on the trip, although there were some internationals. These field trips really let me experience Australia and were such a great part of my time abroad. Participation in them and study abroad as a whole has really been a valuable addition to my personal and educational growth.