The Costa Rica Adventure: Wildlife Research and Videography in One of the Planet’s Premier Biodiversity Hotspots!

I heard the scream come from behind the dining tent, immediately followed by several more shouts of panic as a handful of other volunteers rushed over to see what was wrong. Spurred by a rush of adrenaline and brimming with excitement, I threw on my boots and bolted towards the source of the sound. I knew that only one animal would elicit such reactions from my colleagues, and couldn’t have been more pleased when the small mob of concerned people parted to reveal a beautiful six foot snake reclining by our dining tent and enjoying a gourmet iguana for dinner. Its polished, midnight black scales shimmered in the light of our headlamps, and an iridescent purple coating enveloped its entire body. A mile wide smile spread across my face, and in the span of a few seconds I had decided that I was in love with Costa Rica. 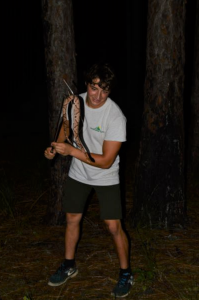 A dream destination for explorers, scientists, and wildlife videographers, this incredible location is home to more than 500,000 species of flora and fauna, representing about 4% of the entire biodiversity of planet earth. And if that’s not impressive enough on its own, don’t forget that all of that biodiversity is packed into an area of land similar in size to West Virginia. This vast amount of plants and animals attracts tourists from around the globe, many of which participate in some form of ecotourism while on vacation in this location. While the ecotourism industry generates much needed money for the conservation of Costa Rica’s natural resources, its effects on the native wildlife is understudied in the countries more rural regions, especially on the outskirts of the famous Corcovado National Park. 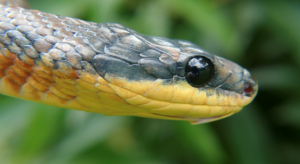 For two weeks during this past May, I was able to volunteer as a field research assistant at a biological research station located just outside Corcovado. The majority of the research that is conducted there aims to gather baseline population data for several species of native wildlife, as well as gain a better understanding of how the ecotourism industry might be impacting wildlife movement in and out of the national park. Because there is such a paucity of data from this part of Costa Rica on this topic, we were studying everything from primates to nesting sea turtles to the lesser known amphibians and reptiles that call this area their home. This was my first experience with field data collection, and while it took a few days for me to get acquainted with our methods, I had an absolute blast once I figured out how the different surveys worked. Another focus of our research station was showing locals that ecotourism brings in more money than the exploitation of natural resources, so the harvesting of sea turtle eggs or wildlife for food should be minimized when possible. We often worked alongside the community on projects such as the construction and maintenance of sea turtle hatcheries, and all of the community members were very knowledgeable about the local ecology. 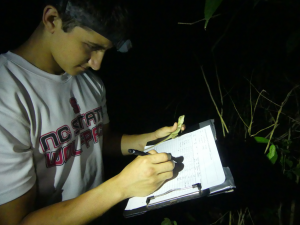 Beyond the research and community engagement, my favorite part of Costa Rica was observing and filming the incredible wildlife that resides there. From world famous primates, birds, and amphibians such as the scarlet macaw and red-eyed tree frog to lesser known reptiles like the neotropical bird snake or water anole, there were opportunities to film animals around every corner. Whether recording a video about the ecological importance of the impressively large but harmless mussarana snake behind our dining tent or breathlessly focusing in on a critically endangered subspecies of squirrel monkey, I was able to capture hours of footage of some of the world’s most interesting animals in their natural habitats. Over the next few months, I’ll be able to edit this footage into publicly available educational videos which will inspire people to get involved with efforts to conserve these lesser known species. All of the videos that I produce will be posted to my Youtube channel, The Wild Report, so be on the lookout for some awesome Costa Rican wildlife coming to a phone, computer, or other smart device near you!