My experience as an Intern Supervisor gave me valuable experience leading young professionals and running my own scientific study. As an intern supervisor I trained four interns to track and survey for eastern box turtles on Centennial campus, managed and organized collected data, and assisted with office duties. The interns were trained to track the turtles using vhf radio receivers that allow us to find the tagged turtles so we can learn where they spend their time throughout the year. As part of this project, the interns surveyed for turtles three days a week to try to find/recapture turtles across the study area. To survey for turtles the interns would walk pre-determined transects that were randomly assigned throughout the survey site. While working in the office I learned what is done with the collected data and entered the data and photos into the states system to be analyzed by the state biologist over the project. This study is the first of its kind since it is a one-hundred year project focused purely on locating and monitoring eastern box turtle populations across the state. 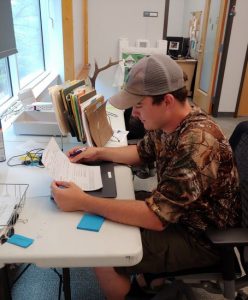 While working as an intern supervisor I conducted a presence absence study on the turtle community. This study focused on trapping aquatic turtle species in several locations around campus to learn what species are present and their health conditions. To do this study I used a hoop net designed to allow turtles to enter but makes it difficult for them to leave once inside the trap. I would bait this trap with sardines and placed it at several locations in a small drainage pond next to a parking deck on centennial campus and behind the Alumni Center in Lake Raleigh. By setting these traps for a set trapping period of three days in each location and checking them daily, I ensured the best coverage of the area without compromising the safety of the animals in the trap.

Once captured I collected biological data such as species, sex, and any health issues that the turtle may have. This study was also the first conducted on campus and the data will lead to future management recommendations and possibly the opportunity for an undergraduate research project for future students!

These experiences gave me valuable knowledge in the data manipulation and the behind the scenes work it takes for managers to run a project and effectively coordinate interns. I also learned what it takes to run a scientific study to gather valuable data that was accurate and useful to the wildlife biologists at the North Carolina Wildlife Resources Commission. Conducting this study helped to reassure me that I am in the correct field and a higher degree is something that I am certainly interested in pursuing. This was also an excellent opportunity to gain connections within the Wildlife Commission that will aide me in future efforts to conduct a masters project and gainful employment.