Fisheries, Wildlife, and Conservation Biology major Dan Guinto traveled to Ohio for the Wildlife Society Conference, where he was able to spend a day with a friend to work on the Lake Erie Water Snake Project. 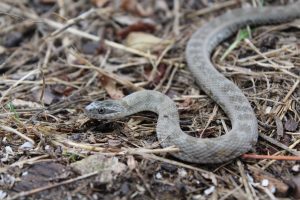 While in Ohio for the Wildlife Society Conference I was given the opportunity to go out on the Lake Erie Water Snake Project. The Lake Erie Water Snake (Nerodia sipedon insularum) is a sub species of the Northern Water snake (Nerodia sipedon) that is endemic to the islands of Lake Erie. The Lake Erie Water snake was previously listed under the Federal Endangered Species Act as a threatened species due to habitat loss and intentional killing. However through the efforts of this project they have since been delisted. Fortunately, one of my best friends was currently working on the Lake Erie Water Snake Project, so my friends and I were able to join her for a day to work on the project. We took a ferry to the city of Put In Bay on South Bass Island just north of Sandusky on Lake Erie. Here we met up with my friend Emma Scott who was working as a research technician at Ohio States Stone Labs.

Emma took us to one of the research sites where researchers have set out large black rubber mats. These mats are intended to absorb heat from the sun to make them warm, which in turn will attract cold snakes looking to warm their bodies. Snakes tend to aggregate under mats in the morning and at night before the sun comes up and after it goes down. This makes it easier for herpetologists to find, and subsequently study, animals like this that are otherwise difficult to find and study. While checking these mats we found close to fifteen Lake Erie Water Snakes that we put in a mesh bag so we could take them back to the lab. In addition we found three juvenile Fox Snakes (Pantherophis gloydi) which is another rare endemic snake species from this region. 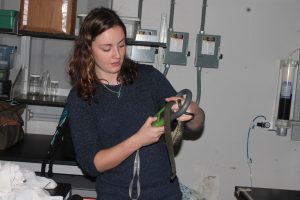 Next we took the snakes back to the lab so Emma could show us the data they collect and how they work up and process each snake. Each snake is weighed, scanned for a PIT tag (a small device injected under the skin that corresponds to a unique code), measured, and marked with green chalk. This lets the researcher now who the snake is, how many times it has been captured and if it has grown. This helps inform the researcher on the number of individuals in the population. The green chalk put on the animals is temporary and lets researchers quickly determine if the animal has been captured in the previous day. The snakes are then returned to the site where they were found and released.

During the conference we got to hear Emma’s boss Kristin Stanford, locally known as “The Snake Lady”, present on the work they have been doing at Stone Labs with the Lake Erie Water Snake. She talked about how they were able to use research, education, and outreach to get the once threatened snake to now have a thriving population. This made the experience even more rewarding and educational, because we were able to see how the actual research was done and then learn how they used this to conserve and revitalize the species.