Environmental Technology and Management major Erika Fye spent her summer conducting research under Professor David Buchwalter in the Toxicology Department on NC State’s Centennial Campus. The experience allowed her to gain confidence through working independently, and opened her eyes to the potential of going to graduate school in the near future. 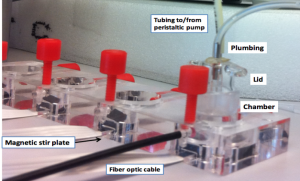 With my grant from the College of Natural Resources Enrichment Fund, I was able to conduct research and work in a lab for the first time. Over the summer, I worked in the Toxicology Building under the supervision of Dr. David Buchwalter, looking at minimum oxygen requirements of freshwater benthic macroinvertebrates in lotic waterways in North Carolina.

Over the course of the summer, I learned how to collect and identify several species of benthic macroinvertebrates, how to set up, run experiments with, and take down an eight-chamber respirometer, as well as how to analyze and interpret the data from the runs. I have also been able to collect specimens on 4 occasions, which has helped my ability to identify the specimens I am working with. I have ended up with data at 3 different temperature points (15, 20, and 25C) for 3 species (Stonefly, Mayfly, and Caddisfly). I currently have data for each experiment on its own graph, and am beginning to create new plots for each species, with our 3 temperature points.

These graphs show the MO2 (metabolic oxygen rate) against the percent of dissolved oxygen left in the water. These graphs are able to show a standard metabolic rate, or the rate at which the MO2 stabilizes, and the critical point, which is the amount of dissolved oxygen in the water where that or any less causes stress, and ultimately death, of the insect. I am using these graphs to see the validity of my hypotheses. 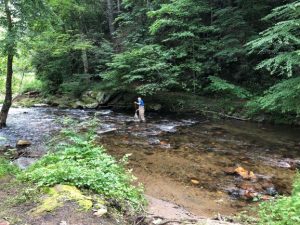 Based off the data I have, I do not have solid conclusions for the three hypotheses I had. I am able to conclude that minimum oxygen requirements for benthic macroinvertebrates differ based on the temperature of the water they are in. I was able to notice metabolic stress in species when the temperature was thermally challenging, but did see stress at either extreme high or low temperatures. The specimens either died very quickly or had data points randomly throughout the graph. This was able to draw a conclusion for my third hypothesis, but did not provide usable data for my other two hypotheses, which are that benthic macroinvertebrates species will differ significantly in their minimum dissolved oxygen requirements, which will lead to the development of key oxygen indicator species, and that body size, due to age of the macroinvertebrate, will not significantly change the minimum oxygen requirements within a given species. More data is needed to give sufficient evidence to support or deny those hypotheses.

Though I was not able to give solid conclusions, I was able to provide data for a larger research project and experience working in a lab for the first time, both of which were valuable to future career and schooling opportunities.