Vegetation Sampling in the Black Mountains

Fisheries, Wildlife, and Conservation Biology and Natural Resource Policy and Administration double major Olivia Merritt led a study on Hermit Thrush in the Black Mountains of North Carolina. The experience improved her range of skills as a field biologist. 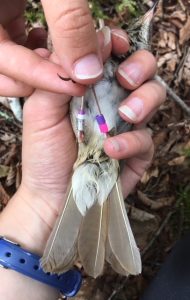 It was raining.  No, more specifically, pouring.  My friend Nicole and I were 200 meters downhill from a trail in the Black Mountains of North Carolina, and we pushed on.

This past summer I spent five weeks in the Black Mountains working on a bird study that I have been a part of for three field seasons.  I study the Hermit Thrush (Catharus guttatus), a species of thrush that breeds in the North Carolina mountains in the summer and winters in the Piedmont and coast during the winter.  Starting approximately 40 years ago, the Hermit Thrush expanded its range southward, going down into the North Carolina mountains.  The great mystery is why this species was able to expand its range, and what are its territory sizes and nesting behavior in its newly acquired area

I have worked with a small team of high schoolers, college students, and employees from the North Carolina Museum of Natural Sciences for the past two years catching and color-banding 25 Hermit Thrushes on one part of a trail in the Black Mountains. An aluminum band with a unique serial number, and plastic colored bands on the Hermit Trush’s leg allow us to identify the bird without catching it again (pictured). I also was a part of attaching small radio transmitters to 12 individual thrushes and tracking them throughout the forest.  With these two things, we were able to create a map of the territories of each Hermit Thrush tracked and the locations we caught each individual.

What this study was missing was habitat information.  The Hermit Thrushes moved southward 40 years ago. There are speculations that hurricane damage may have created more optimal habitat for them.  The only way to determine if this is the case, and if not, what else it could be, was to collect data on different vegetation plots.  My team and I put a grid on the trail on Google Earth and chose vegetation plot locations based on Hermit Thrush sightings.

This brings me to the rain.  It was a very wet summer in the mountains; a record for the 21st century.  Nicole and I went out into the forest anyway, determined to measure an 11.3-radius circle plot and perform different measurements such as canopy cover, ground cover, diameter sizes of trees (DBHs, anyone?), and number of saplings.  It took us 2.5 hours to do one plot, where, on a dry day, it could take anywhere between 35 minutes to 1 hour.  We were some team though, with one person measuring trees and slope of the landscape while the other stood underneath a dripping tarp and scratched the numbers into the soaked paper. 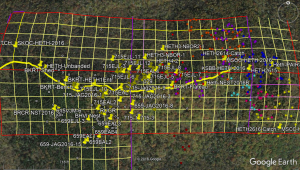 This rainy episode in the mountains taught me a number of things that, as a field biologist, I will remember for the future.  One: resilience is important in any study.  We could have given up that crazy day in the rain, but we persevered and finished the plot.  This could apply to any field work or schoolwork endeavor. Keep chipping away with quality effort, and you will succeed.  Two: know when to give up.  After the third straight day of rain and a forecast that called for rain for the next five days, we decided to take a break from data collection.  I went home, and luckily missed the mudslides and high flash floods that overtook the valley I was staying in.  Be smart, and use common sense to understand when it’s time to stop for the time being.  And lastly: have fun.  Did it feel slightly miserable to be soaking wet and trying to collect data? Yes.  But that didn’t stop me and Nicole from joking around and encouraging each other, laughing when one of us slid in the mud or struggled to measure a tree.  Do science, and do it well, but don’t be afraid to enjoy it.