Thrown to the Wolves

Jenn Smith, a Fisheries, Wildlife, and Conservation Biology major, spent her summer in Battle Ground, Indiana, where she interned at a canid conservation center called Wolf Park. This internship helped ensure Jenn that this is where she wants her life to go. 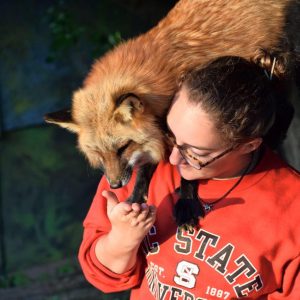 This past summer, I spent three months with a canid conservation center called Wolf Park in Battle Ground, Indiana. My days were filled with a lot of variation and long hours, but there never came a time where I didn’t want to get up and work. I loved every minute. By far, this was the most impactful summer of my life.

My days usually started around 8 am, when I got up to distribute morning medications to our animals. We called this “morning meatballs,” as we usually used some kind of meat to hide the pills. All of our animals are vaccinated and receive medications when needed just like your pets at home.

In the middle of Indiana, the morning walk down to the park from the intern house was comfortably warm and filled with greeting howls and yips. Three days a week, after morning medication rounds, the interns were in charge of butchering and dispersing food for the animals. Many visitors are surprised to learn that we only feed three times a week—but in reality, our animals are spoiled. Canids in the wild never eat as often as ours do. We fed our animals roadkill deer that either we drive out to pick up or the public drops off. Sometimes we received donations of livestock that died of natural causes from neighboring farmers. One of the coolest butchering sessions I was a part of was of a recently deceased llama.

On days where we’re not required to feed came the best part of my job—enrichment with our park’s animals. Wolf Park has 11 wolves, 1 coyote, 2 red foxes, 1 grey fox, and 15 bison. All of our animals are socialized with humans. This is very different than the animals being domesticated—they were raised with humans as a part of their everyday environment and are not treated as pets. Because of this, staff and interns were allowed to go in with our animals inside their enclosures under supervision. Even to the very last day of my internship, my heart raced and my palms became sweaty at the excitement of interacting with a predator this large. 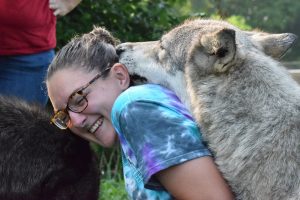 Over the summer, I learned each animal’s personalities and ticks. I loved every animal in that park, but I can say I developed some favorites! Over the summer I also got to practice my operant conditioning skills with our animals, especially the foxes. I earned the ability to go in with our foxes on my own, and I had a blast with testing their learned behaviors and helping teach them new ones. I developed a passion for animal training that I hope to take with me in my future career.

In the afternoons, a big part of my day was greeting the public visitors in the gift shop and giving tours of the park. I was extremely nervous about this at first, as public speaking isn’t a strong skill of mine. But over time, I became much more confident in my knowledge of canids (our animals specifically) and the park. I loved answering questions, and with the right engaged crowd, I actually loved giving tours.

Wolf Park was the best thing I’ve done for myself. The amazing people I met helped change my life. The animals, every one of them, ensured me that this is where I want my life to go. I couldn’t have asked for a better summer.