Major Thunderstorm = One of the Best Weddings of the Summer!

Jordan Diard, a Parks, Recreation, and Tourism Management Major, interned at the Bradford, a wedding venue in Chatham County. This experience allowed her to gain valuable social media marketing skills, which she can transfer to future careers. 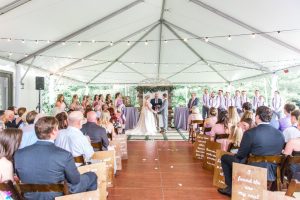 The second wedding I worked at The Bradford was the most chaotic, but best weddings I worked all summer. The wedding had about 160 guests, which is only 20 guests under our maximum capacity, which utilized all of our indoor and outdoor spaces. On the day of the wedding, the interns and event manager arrive at the venue around 8 or 9 in the morning to serve the bride breakfast and to start preparing the venue. We were checking the weather that morning as we do on every event day, and there was a large chance of thunderstorm for that afternoon and evening. We talked with the planner and the bride and eventually decided to move the ceremony under the tent instead of in the side lawn, which isn’t covered. Since we moved the ceremony under the tent, the reception had to wait to be set up until during the cocktail hour, which takes place inside the house. 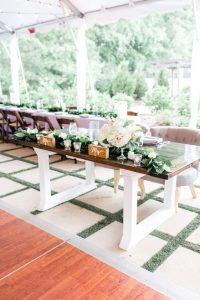 The entire morning, I was frantically running around grabbing tables and chairs to stage them in the ballroom, so that as soon as the ceremony ended we could just carry out tables and then the planner and florist could work their magic to make everything look great. As we were setting up for the ceremony under the tent, we realized the bride had this beautiful set of antique doors she was going to walk through to go down the aisle. However, since the terrace where the tent was set up is directly at the back doors of the house, we thought it would look bad to have two sets of doors next to each other, so we moved the doors to be a backdrop behind the bride and groom during the ceremony. The doors were very old and for sure not built to be moved, so it took us 2 carts and 6 people to move the doors without breaking them. It was a very funny and nerve wracking moment to say the least. We ended up getting all the chairs for the ceremony set and tables placed properly, so when it came time for the flip everything went smoothly.

The bride was very flexible and willing to work with us and the weather, that it made working the event such a joy. Everything about the wedding went so smoothly, which was a relief after a stressful set up. The wedding itself had one of my favorite design concepts of the entire summer, which looked even better under the tent than it would have outside.