Sustainable Materials and Technology major Max Craft traveled to Ecuador to learn about the sustainability of bamboo, and its strengths as a building material. He was able to apply what he learned in the classroom by building a shelter that members of the community are able to utilize. 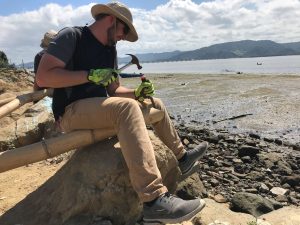 The sustainability trip to Ecuador which focused on bamboo was a once in a life time experiences that I will be forever grateful for. While we were there, we went to one three hour workshop where we had a lecture and a lab for bamboo cutting. We learned where to cut the bamboo according the node, which typically needs to be 3 to 5 cm below the closest node to your cut. This allows the bamboo to be as strong as possible, because the nodes on the bamboo are the strongest parts of the plant. We also learned about fish mouth cuts, which are arc-like cuts made at the top of the piece of bamboo to allow the bamboo to perfectly fit on another piece. We then used hand saws and chisels to make these cuts. The workshops were outside in a beautiful location. They were so fun, as well as very informative. I was able to learn from professionals who have been building with bamboo for over 30 years. That was an opportunity I would have never been blessed with if I didn’t go on this trip.

The day after we had the workshop, we were able to put out skills to the test! For the next two days we worked on an amazing project. In one of the communities there was this bare place right next to the water, where many people liked to go watch the sunset. When the earthquake hit in 2016, nobody had a home anymore. We were told that for a few months, more than 6 families lived in this area with absolutely no shelter. Therefore, our project was to build a 4×3 m shelter with a roof, and benches all the way around. For the next two days, with the help of locals, our group of 20 students worked together to build this structure. Being able to actually build with the bamboo and use the ideas we had learned was awesome. But what was even more awesome was seeing it go from being nothing to a complete shelter! 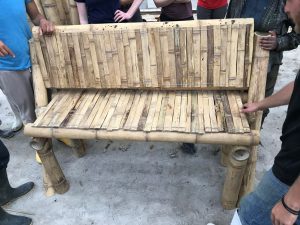 On the last two days, we were able to use our bamboo skills again. They let us have a two day free build, where we were able to build whatever we wanted, as long as we could finish it, as well as build something that could help the community. My group and I decided that we were going to build benches for our project, and let the trip leaders decide the best places to put them. We spent a decent amount of the first day assembling the right prices of bamboo and drawing the blueprint up for the benches. After we were done with that we were able to do a few cuts before it was time to stop for the day. We came back the next day and finished up all of our cuts, and then it was time to put it together. It was a process that did not go as smoothly as we had hoped, but at the end of the day we were able to get the benches completed!