Cobras: The Real King of the Jungle

Fisheries, Wildlife, and Conservation Biology student Thomas Reed spent his summer conducting research at the Nanjing Forestry University in Nanjing, China, where he was a technician on several frog and other herpetological projects.

The first week of July marked my halfway point of the summer. Our team decided we would take week long trip to go herping (the act of searching for reptiles and amphibians) in Hong Kong. The first day we caught up with some locals and settled in. Then on the evening of our second day in Hong Kong we went off in search of snakes specifically cobras. Our group consisted of Dr. Kevin Messenger (NC State Alumni), a local snake expert Will, another summer technician and myself.

The search began late one evening with a bus ride to the southern end of a trail in the Mountains of Lantau Island. We spent the night hiking and exploring around this trail. The area has been known to produce many snakes for both Will and Kevin in the past, so our chances were pretty good to find our main target the Chinese Cobra (Naja atra) as well as many other species of reptiles and amphibians. 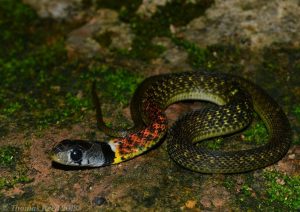 The plan for the night was to walk along the trail in the valley and look for snakes that were in the valley as well as along the sides. Typically this is achieved by splitting up and having some individuals walking down the center of the trail as well as having someone walk at higher elevation looking along the sides. As we started the hike we almost immediately found our first snake of the night, a Red-necked Keelback (Rhabdophis subminiatus). This is a really interesting species of snake as it is both rear fanged venomous as well as poisonous. Unlike most snakes, some of the keelbacks have poison glands on the back of their neck where they can actually secrete toxins. After we took a few pictures of the animal we moved him off of the trail and continued on with our hike.

After a while of not seeing much other than frogs and the occasional Keelback (they are common in this area) we finally came across a new snake species for the night. Those of us who were down in the valley of the trail walked up upon a juvenile Chinese Cobra (Naja atra). This individual was stretched out on the ground and was surrounded by ants, so unfortunately we assumed he was deceased and gently touched him with our snake hooks. Much to our surprise he immediately reared up into his “hooded” stance. I remember standing there in shock from seeing an animal so beautiful. Right in front of me was an animal I had dreamed of seeing ever since I was a young child. Cobras are one of the most iconic snakes for animal lovers. As a kid I read about them in books, saw them on nature documentaries, and drew pictures of them. I had never imagined I would actually be able to experience seeing one in the wild until this very moment. This animal was a first for both the other technician and myself so we spent time taking pictures of the animal before placing him in a snake bag to collect data the next day. 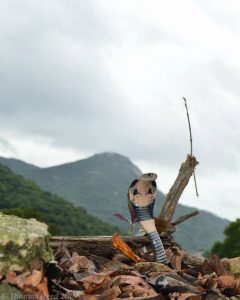 After the cobra encounter, we were all running on adrenaline from the experience and continued our hike to see what we could find. Less than ten minutes later we heard Will yelling from the higher elevation. It was hard to hear exactly what he said so we paused and I mentioned that it sounded almost like he said “King Cobra” so we started running to find a ladder and get to higher ground. As we were running towards where the snake was spotted, Will explained that he was in a difficult spot so we better turn off our torches so that everyone would have a chance to see him before scaring the snake off. As we all got near were the snake was we turned on a light and were able to see yet another species of cobra the Chinese King Cobra (Ophiophagus hannah). The King Cobra is by no means a common snake on the islands and we were told before arriving that we were almost guaranteed not to see one. In addition to them being uncommon, this was also a juvenile that was still young enough to have his baby markings, which was a first for both Kevin and Will. We were exited to observe this young snake cruising along a rock face. Unfortunately, due to the location, we were unable to get closer for photos or data on the individual. After a few moments of observing the snake, he went about his way and disappeared into the surrounding brush.

As the night went on we continued to hike and found a few more species of snakes and other herps along the way until it was time to call it a night and head back to town. This was a night full of amazing experiences, beautiful animals, and great friends. We ended up staying in Hong Kong for another 5 days and continued to search for snakes every night. By the end of the trip we observed over 40 species of reptiles and amphibians, 17 of which were snakes.