Fisheries, Wildlife, and Conservation Biology student Thomas Reed spent his summer conducting research at the Nanjing Forestry University in Nanjing, China, where he was a technician on several frog and other herpetological projects. 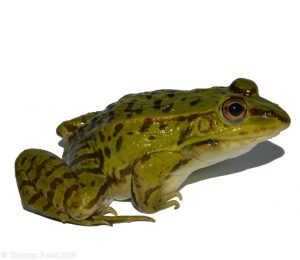 This summer I had an incredible opportunity to assist in research at the Nanjing Forestry University in Nanjing, China. The research focused on  a particular group of frogs within the Pelophylax genus, including Pelophylax nigromaculatus and Pelophylax plancyi (both pictured below) that are found inside China and surrounding countries. As a technician on the project I’ve completed a wide variety of tasks associated with the frog project and also had the opportunity to participate in many other herpetological projects for a professor at the university.

A typical field day involved being nocturnal and starting our day a little before sunset. Typically we would meet up with the rest of the research team at this time and prepare to go out and complete our surveys. In order to prepare for our surveys we first collected all of necessary gear such as headlamps, torches, and cameras so we could see and photograph specimens. We also carried plastic bags in order to catch the frogs and transport them back without the risk of cross contamination or spread of diseases.

Once we gathered all of our supplies we made our way to a previously decided upon study site. These sites were chosen based off of the habitat preferences for our focal species, as well as being in an area where we needed to collect new samples. Upon our arrival we used the remaining light of the day to find areas within the location that looked like ideal collection spots and waited for sunset. 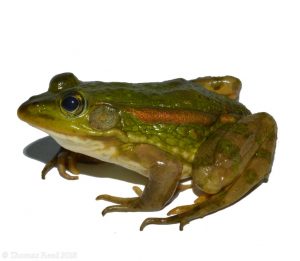 As the sun set, we would begin to walk around the water’s edge and followed calls until we found the frogs. When we found the frogs we collected our necessary onsite data, including details such as the air and water temperatures and GPS coordinates. Next, we recorded the frog calls to be further analyzed along with other recordings later on in the project.

After recording the onsite data, we would attempt to catch the necessary frogs for our sample. This could be as simple as reaching down to pick one up off of the ground, or more complex involving wading out far into the water and jumping onto the frogs that were amongst the water lilies. Once we caught a frog with the bag we would fill it with air and tie it off. This method of transportation allowed for enough air to safely transport for the short distances we move them. Once we caught enough frogs for our sample we returned to our lodging and began to process the frogs one by one. 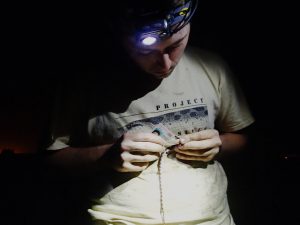 For the collection of data for the frogs we started by swabbing each frog in a few places along their body to test for BD (Batrachochytrium dendrobatidis), a disease that is common amongst many amphibians worldwide. It was also necessary to swab the insides of their mouths in order to gather a DNA sample that could be processed later in the lab. Once we finished collecting physical samples from the frogs we gathered morphometric data by making various measurements on the frog, such as head length, SVL, length of legs, etc. After a few more photos of each frog with their swabs and assigned ID numbers they were all released to the same spots where they were captured during the survey. This cycle repeated itself the next night at another location in China.

During our surveys we were mainly looking for our target frog species however we also collected data on other animals we found, such as snakes, other frogs and even animals like hedgehogs. This summer has allowed me to expand my experiences working with reptiles and amphibians while also learning about the natural world and the culture of China.

To read more about Thomas’ experience in China, read “Cobras: The Real King of the Jungle.”