Getting Hurt in the Wild

Fisheries, Wildlife, and Conservation Biology major Dylan Wingler participated in a 3-day course to receive his Wilderness First Aid Certification. He was able to use the skills he had learned when a fellow coworker fell and injured his knee on the job. 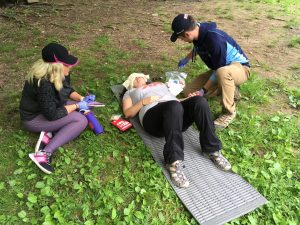 This past summer I was able to get my Wilderness First Aid Certification funded by the College of Natural Resource’s Enrichment Fund. The class was held in Nantahala, North Carolina which is a pretty remote area. It really put the emphasis on wilderness! The class lasted three days and covered a variety of scenarios and how to act in those scenarios.

The first day we went over general first aid topics such as small wound treatment, general sickness, and dehydration. Throughout the day we were given small scenarios on how to treat those specific conditions. At the end of the day we had a scenario in which we had to diagnose the problem and provide aid. My scenario was a hiker on a trail had fell and cut their leg, pretty simple diagnose and fix.

The second day dove deeper into providing aid. The scenario given at the end of the day was that a hiker had rolled an ankle in a fall. Being able to diagnose the injury was easy but providing aid was the tough part, given that we were only allowed to use what was in our hiking packs. Fortunately, I happened to have my trekking poles in my pack which I used to help stabilize the sprained ankle. 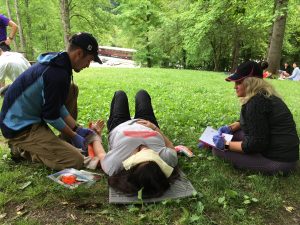 For the last day we covered large injuries such as bone fractures, concussions, and spinal injuries. The final scenario played out that we ran a across a hiker in a steep gorge that had a small cut on their head, seemed pretty simple but after going through the process we learned to assess injuries we determined that the hiker had fallen and been concussed. After further examination the hiker had begun losing feeling in their legs, in which we immobilized them and moved to a safer location outside of the gorge.

This experience provided me with useful skills on determining injuries and how to provide aid to them. After taking the class I began a job working in remote areas throughout western North Carolina and had a situation occur where I had to apply these skills. A fellow co-worker had fallen and hurt their knee to the point where they couldn’t move it without pain. Being able to splint his leg properly, we were then able to get to a trail where we could be picked up.