Producing a Documentary – What I Learned about Filming, Interviewing and Editing

Producing your own documentary is a great way to exercise your creativity while conducting research and networking with other people. In a previous post, I explained why I chose to produce a documentary for my UHP capstone project, and listed some steps I took to plan and prepare. In this post, I’d like to share some tips and ideas from my personal experience with filming, interviewing, and editing.

For me, editing was by far the most time-consuming stage. Since sitting at a computer for extended periods of time can be unpleasant (especially if you have poor posture) and can strain your eyes, I came up with a more hands-on approach to editing my interview footage. I wrote a numbered outline of each interview, using a different colored marker for each person. 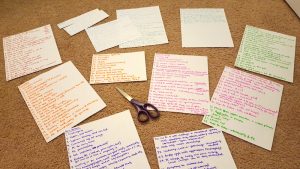 I took pictures of these (to refer back to later) and then cut each interview into strips, with each strip containing a numbered point. Then, I rearranged these strips into an order that made sense to me, to create my “storyboard.” 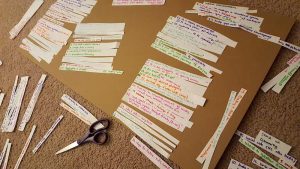 Later, when I edited on my computer, I would take the clips I wanted to use and arrange them in my video editor, based on the order I came up with on paper. As I edited, I would sometimes come up with a better order for some of the clips and move my papers around accordingly. Whenever I finished editing a large segment, I would take those strips and put them away in a folder. It was very motivating to have such a tangible sign of my progress, and to be able to take a break from the computer screen every once in a while.

Here are a few other things to consider:

There are many other things to consider when making a documentary, but these are just the ones that stood out to me during my project. In general, planning ahead and being strategic can save you a lot of time and frustration.

At the same time, you can learn a lot through experimentation, and through trial and error, so avoid stressing over getting everything right the first time. When you’re done with your project, what you’ve learned about yourself and your work style, through both your successes and failures, may be just as valuable to you as the documentary you produced.