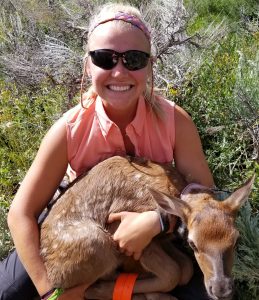 The clouds finally gave way to sunshine, and we were quickly on our way to the busiest weeks of the summer: fawning and calving season. Generally, the heaviest week for fawning is the first or second week of June, but this year they started a little early. We began catching fawns the last week in May and lasted until mid June, we were really busy following VIT triggers, searching for fawns and calves, and then processing and collaring them when we found them. Processing a fawn or a calf entails several steps. First, we measure the right metatarsus, body length, girth behind the front legs, and hoof growth. We also check umbilicus condition, hoof condition, and weigh the fawn or calf. Lastly, we place a previously programmed collar on the individual so we can continue to keep track of their condition.

“I got it,” I yelled over the loud bleats of the calf. “Hurry up,” I said as I grab the calf and straddle it quickly. I pulled at the buff around my neck until I could slide it over my head. I placed the buff over the calf’s eyes to evoke a calming sense and stop it from fighting and flailing around. Finally, Katey and Sam came running down the hill and down into the ravine where I found the calf. Katey immediately threw me the hobbles from her pack, and I started gathering the calf’s feet to tie them together so we could quickly work on the calf and decrease the chances of hurting the calf or ourselves. With the calf hobbled and blindfolded, we were ready to start collecting data. We measured body length from snout to the start of the tail, chest girth, and right metatarsus. Then, we sexed the calf, check her umbilicus, examined hoof growth and condition, and weighed her with a digital scale. Now, it was time to draw blood. Katey laid behind the calf using her hands and arms to occlude the jugular for me while I used a syringe to draw 10 mL of blood from the calf. Finally, we placed a GPS collar around the calf’s neck, unhooked the hobbles, and released the calf. The calf’s mother had been barking at us from the aspen grove above throughout the process, so we watched and listened as they reunited with each other. Each calf and set of fawns is different, so with each animal, I learn something new. This calf in particular took three days to find and catch. Many hours were spent observing the mother, searching for the calf, and returning to repeat the process. Therefore, the act of finally catching a calf and successfully processing and collaring the calf is so satisfying and adrenalizing. This is just one of many captures, for we caught over 40 fawns and 20 calves, so the learning opportunities were unending. If you mess up on a calf taking blood, you get another chance to perfect your methods and continue to learn the behavior of these ungulates, making it easier to find and capture their offspring.