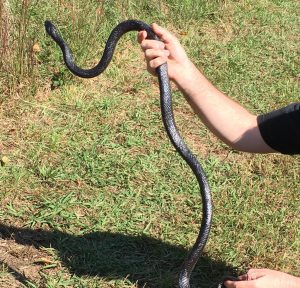 Over the past year, I have been working on a wildlife health project focused on Snake Fungal Disease (SFD), an emerging infectious disease being found in snakes across eastern North America. It is believed to be caused by the fungus Ophidiomyces ophiodiicola, and some common signs across species are lesions, scarring, and deformities in growth. Although its effects on individual snakes are well documented, the impact on populations is still relatively unknown. With the help of Dr. Daniel Dombrowski at the NC Museum of Natural Sciences and Dr. Gregory Lewbart at the NCSU College of Veterinary Medicine, I developed a project on the health of the black rat snake population at Prairie Ridge and the incidence of SFD. It is a capture-mark-recapture study where individuals are given a physical examination and implanted with a microchip. With each captured snake, data is recorded on the individual’s coordinates, microhabitat, body condition score, and severity of skin lesions/other SFD symptoms. In addition, blood testing is conducted using a lactate meter and i-STAT analyzer, as well as pathogen testing to see whether the animal is positive for the disease.

In addition to the CMR study, there is one snake at Prairie Ridge that is tracked on a bi-weekly basis via radio telemetry. It was found in late 2015 with injuries thought to be caused by a lawn mower. Shortly afterwards, it was discovered that the individual was positive for Snake Fungal Disease, and is believed to be partially blind due to scarring from healed facial lesions. The individual was treated for its injuries and then released back into the wild with a transmitter in April 2016. The snake has tested positive for SFD several more time since its surgery, yet seemingly lives a “normal” life and is quite active. Currently, she is back at the same location she hibernated at all of last winter and interestingly enough, I have not tracked her to that location since she came out of hibernation last April. 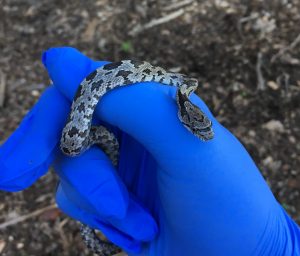 Earlier in the fall, I came across this little guy near the outdoor classroom complex. Although it may not look like it, it is indeed a young black rat snake, likely no more than two or three months old. Though there are no current plans for it, an interesting project extension would be to test such hatchlings for Snake Fungal Disease.