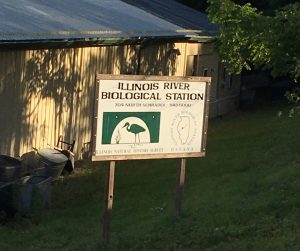 Over the summer, I worked for the Illinois River Biological Station on the La Grange Reach of the Illinois River. Approximately half of my job was conducting statistical analyses on 23 years of community fisheries data specific to Smallmouth Buffalo in the La Grange Reach of the Illinois River. I compared various metrics and identified several significant population trends that had developed since 1993. Smallmouth Buffalo are a commercially valuable, large bodied fish common throughout the Illinois and Mississippi Rivers. In addition to data mining, I was also heavily involved in other studies and research being conducted at the station, which allowed me the opportunity to spend many exciting days on the river.

A typical field day was working with one of the fisheries biologists on a net or electrofishing boat, but I also went out with the zooplankton and water quality teams several times. I would help the technicians ready the boat and we would usually leave by 8:30 a.m. There was one day in mid-June on the net boat that was particularly memorable.

Kris, the lead biologist, Matt, a field station technician, and I were driving down to Bath, Illinois to set some hoop and fyke nets for the day. Bath is a tiny town about 20 minutes south of the station with extensive backwaters stemming from the river. It also happened to be mayfly season, and the insects were hatching by the thousands. All along the banks of the river, trees were covered in moving, black leaves. 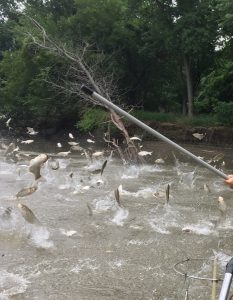 After launching the boat, Kris let me take the wheel for a couple miles until we reached the backwaters. This summer was essentially my first extensive experience with boats, so my driving was somewhat rusty, especially since the sampling boats are heavy and flat-bottomed. Nevertheless, I got everyone to the location in one piece and on schedule. The backwaters are a lot shallower than the main channel, and tend to be filled with underwater hazards like fallen trees, so Kris took back over. However, I quickly found out that trees weren’t our only concern. In addition to the constant battering of mayflies, silver carp began leaping out of the water like torpedoes with no warning at all, many into the boat! For those who do not know, silver carp are an invasive species from Asia that have claimed the Mississippi River region in extraordinary numbers. Their instinctual defense mechanism is to jump, and this is easily triggered by a passing boat. I found out quickly that a five to ten-pound leaping fish can pack quite a punch if it hits you on a moving boat. 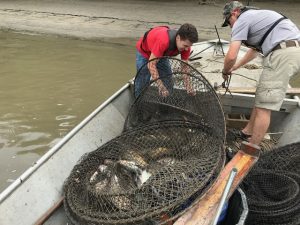 After passing all these obstacles, our team finally arrived at the backwater GPS points. Matt and I set the nets using rebar, while Kris maneuvered the boat. Minifyke nets will be retrieved after 24 hours, while the hoop nets remain in the water for 48 hours. Pulling nets full of fish is a whole other story, yet equally as fun and exciting!