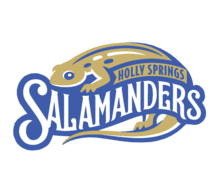 Not only did I learn a lot about what goes into running a baseball game, I made many great connections with full time staff of the Salamanders,  fellow interns, and with employees for the Coastal Plains League.

One of the most liked parts of my internship included interacting with the fans. Some of my favorite games to work were when I was placed on the Promotions team. One of my most memorable interactions involved a little 6 year old boy.

The 6 year old wanted to run out with the outfielders meaning he was first in line to come out. Despite numerous times of telling the boy what to do and where to run, when his time came he decided to forget everything and just continued to run around the entire outfield and not stand with his player. The stands filled with laughter, and so did the player he was supposed to stand with, as the little boy circled the entire outfield in his own little world.

When I brought the kids back up to their families, the little boys dad said “I am so proud of you, you were awesome out there!” and continued to thank me and tell me that this was going to be the highlight of the little boys summer. This was something that I found to be very fun and rewarding. It was one of the highlights of my time on the Promotions team; knowing that I made an impact on a fans game day experience, meant alot to me.

A Holly Springs Salamanders Summer – Read more about Hannah’s internship with the Salamanders!