In the summer of 2016, I discovered Burkett Farm, a small farm in Cary, NC that uses organic practices to grow food which is provided to food-insecure people in the Triangle, through InterFaith Food Shuttle and other food banks. Because of my interest in agriculture and horticulture, I decided to volunteer on the farm for a day with one of my friends. Although it was hard work under the hot summer sun, I really enjoyed the experience. So when I reached out to the farm to see if we could arrange an internship for my fall 2016 semester at NC State, I was thrilled by their positive response.

While working on the farm, I had the opportunity to learn various techniques and methods, from the simple (such as properly digging up sweet potatoes without breaking them) to the slightly more complicated (such as operating a walk-behind tiller). This internship made me realize that I really appreciate working in an occupation where I’m always learning new things and developing new skills. Farming is inherently such an occupation. It’s also really hard work. Most days, I would leave the farm covered in soil and drenched in sweat – until the cold weather set in. Then, bundled in layers upon layers of clothing, the biggest issue was being able to feel my fingers. Nevertheless, being able to spend the whole day working outside was refreshing and invigorating.

Throughout my internship on the farm, I was intrigued by interactions between the soil, crops, other plants, insects, and climate. I always came away with new insights and even more questions and mysteries. For example, when I was digging up the sweet potatoes, I observed that many of them were long and thin and squiggly, instead of short and fat and relatively straight, like the ones I usually see in the grocery store. Here, the soil was mostly heavy clay. I learned that as the sweet potatoes collided with the clay, they would be stunted, or forced to grow in other directions, leading to unusual shapes and deformities. This meant that after we harvested all the sweet potatoes, but before we washed and packaged them all in cardboard boxes, we had to sort them by size and shape, because the restaurant to which we were delivering them wouldn’t want the squiggly ones, but the best of the squiggly ones could still be donated to a local food bank.

One thing that was difficult for me was that many of the tasks necessary for operating a farm are mundane or simply annoying – such as weeding. Sometimes I appreciated the rhythm of these repetitive tasks. But even tasks that are interesting or fun in the beginning can become monotonous after a while. This challenge was typically overcome with some humor and patience, as well as by listening to music and podcasts, telling jokes and stories, and having conversations about pretty much everything. In the end, what I initially perceived as a challenge ended up being an opportunity for getting to know the other people working on the farm, and growing friendships that made this experience all the more meaningful to me. 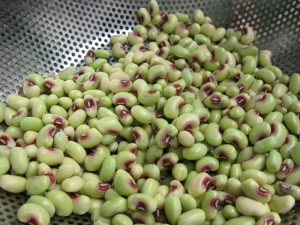