Disclaimer: This blog post has exceeded the 500 world limit. Proceed at your own risk.

Before I begin talking about the sea lion eye surgeries that took place that Friday I will first answer some questions asked to me by my avid readers. If you recall in my last post I talked about some of the resident animals at IMMS, such as Bo and Buster the retired Navy dolphins. By the way, there seemed to be some confusion in my last post about what turtles do for the Navy. To my knowledge the Navy does not use turtles.

Q: What do the dolphins do for the Navy?

A: As far as I know the Navy has studied Bottlenose Dolphins since the 60’s to learn about their sonar and diving abilities. They also train these animals to recover equipment, detect mines, and protect the ship, as well as use video surveillance. Apparently they also use California sea lions and other marine mammals in their program at SPAWAR. Here is a link because I am not an expert, and this post is getting dangerously long http://www.businessinsider.com/the-us-navys-combat-dolphins-are-serious-military-assets-2015-3.

I also thought you all out there in the blogosphere might want to know about the resident dolphins if you ever decide to pay a visit to IMMS. As you know Bo and Buster are retired Navy dolphins. Bo is a female and the oldest of the three dolphins, you can tell her apart from the other two by the fat rolls under her neck. Buster is considered the “grandpa” of the group; he has white around his rostrum (nose), which makes it look like he is wearing white lipstick. Apollo is the third and youngest dolphin. He came to IMMS after he stranded off of Grand Isle, Louisiana. When he stranded he developed sun blisters and now has scars on his back from the sunburn. When he came to IMMS he was rehabbed in the hope of being released, but the government stepped in and deemed him non-releasable due to his young age, his deafness, and absence of a mother, so it was thought that he would not be able to survive out in the wild on his own. Below are videos of Bo and Buster arriving at IMMS, as well as Apollo!

IMMS also has six resident sea lions. Come again? Sea lions as in CALIFORNIA sea lions? I know! I was confused too when I first heard there were sea lions living in Mississippi. A while back there was a mass stranding of sea lions along the Californian coast, some died, some lived, some were rehabbed and released while others were never fit for release. There were so many stranded sea lions that there was not enough space available for all of the sea lions at the various zoos and aquariums in California. So California sent them to other facilities across the country and IMMS was lucky enough to have a place to house them. Below is a video of the sea lions arriving at IMMS. Kaytee, Gabby, and Maya are the three sea lions that received the eye surgeries.

Now to what I really came to talk about and you’ve been dying to read!

Marine mammals in captivity have been known to develop corneal ulcers due to water conditions, nutritional deficiencies and excessive exposure to bright light, this is increasingly common in pinnipeds. In our case the salinity of the sea lion pool was slightly lower than normal. Additionally, the low absorption and high reflection of the pool paint exposed the sea lions to high amounts of UV rays/light. The surgeries were performed by Dr. Carmen Colitz, a leading veterinary ophthalmologist in her field (and a fan of NC State)! Here’s a link to learn more about what she does http://www.jupiterpet.com/Our_Doctors.html (Side Note: I think I have abused my link privileges). She’s a really awesome lady and a great teacher! I will now try to condense everything she taught me during the four hour surgery. Forgive me if I don’t explain it as eloquently as she did.

That Friday morning we all arrived at IMMS at 5:30 to prepare for the big day ahead of us. Gabby’s surgery was first and her case was the most grueling of the three. In total her procedure probably lasted around 2.5 hours, whereas the other two only lasted 15 minutes each. Gabby had a corneal edema which is the swelling of the soft tissue and causes the cornea to become compromised as it fills with excess fluid. Dr. Colitz compared the eyeball to an Oreo cookie with its different layers. The eyeball has three layers, within the first layer is the cornea which is made up of four different layers (these are the layers described by Dr. Colitz as the cookie). The first layer is the epithelium which has the same structure as the skin. The second layer is the stroma and the third layer is called Descemet’s membrane. The final layer is the endothelium which is similar to the epithelium but it is the anterior chamber of the eye. Gabby’s corneal ulcer had eaten through two layers of the “cookie”. A complete rupture could cause the eye to herniate and Gabby would lose her sight, this condition is called descemetocele.

The eyeball is avascualr so there are no blood vessels supplying nutrients, which makes the infection hard to clear. To repair the descemetocele, Dr. Colitz cut a piece of eye skin into a peninsula shape and placed it over the corneal ulcer, providing vessels to the sight of the injury, which is what it needs to heal. This is called a conjunctival flap and it doesn’t hinder movement because it is very elastic, while still holding its shape. Dr. Colitz then inserted a cyclosporine implant (slow release medicine) that decreases inflammation caused by neutrophils and macrophages. It is then sutured flush with the eye and the sea lions are given artificial tears to keep the eye lubricated. Maya and Kaytee’s corneal ulcers weren’t as severe as Gabby’s and they only needed the implant, so their surgery only took about 15 minutes each. 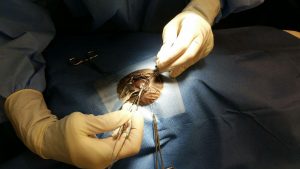